This Traditional Greek Salad recipe is so delicious. Every bite conjures up feelings of sunshine and summer with bright, bold flavors and big crunch. The best part about this recipe is that it is so easy to put together. 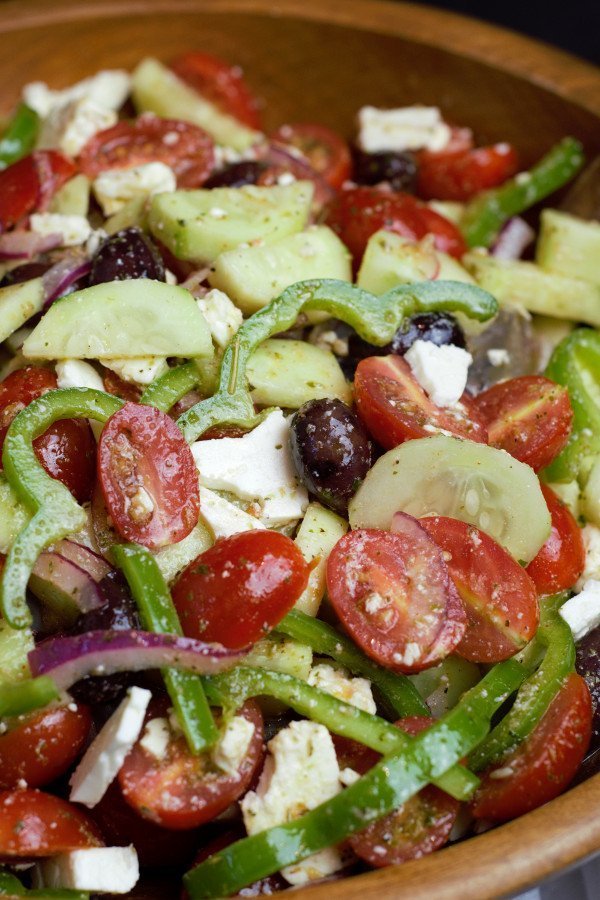 Greek Salad cut up and dressed ready to serve in a wooden bowl.

I always thought of a Greek salad as the kind with romaine lettuce. It wasn’t until I honeymooned in Greece that I learned the difference. I ate the traditional version day in and day out our trip to Greece. We really enjoyed it for the first twelve days or so, but then we had enough. It might just be a California thing, but after a few weeks of getting salad without lettuce we really started craving lettuce. There were frequently other salad options, but nothing had lettuce. The last few days of our trip we had this desperate search for “real” salad. Finally, we happened to walk into a restaurant and the menu said lettuce salad. The server probably thought we were crazy because I think we might have exclaimed our order a bit too enthusiastically. When we finally got our lettuce salad it was just a head of chopped green leaf lettuce with salt, pepper, oil, and vinegar. In that moment it tasted so good.

Another traditional dish we had on our honeymoon was this Lemon Chicken Soup Recipe called Avgolemono.

How to Make a Greek Salad

Now that I’ve had a little distance from that experience, I can safely say that Traditional Greek Salad is one of my absolute favorites. The best thing about it,is that all of the ingredients are super easy to find and it takes no time at all to throw one together.

Start by washing all of your produce. I do this by making a bowl of ice water, and soaking my tomatoes,cucumbers, and bell pepper in the bowl for a few minutes. The dirt comes off of the produce and the ice water helps crisp everything up.

Peel the cucumbers and cut into half-moon shapes about ⅛” thick.  Cut your tomatoes into 1” pieces or if you have cherry tomatoes simple cut them in half.Cut open the bell pepper and clean away the stems and ribs. Cut in half and then cut from top to bottom to make skinny strips. Peel a red onion and cut into very thin half-moon slices. Put all of the chopped produce in a large bowl. Add drained olives and crumbled feta to the bowl. 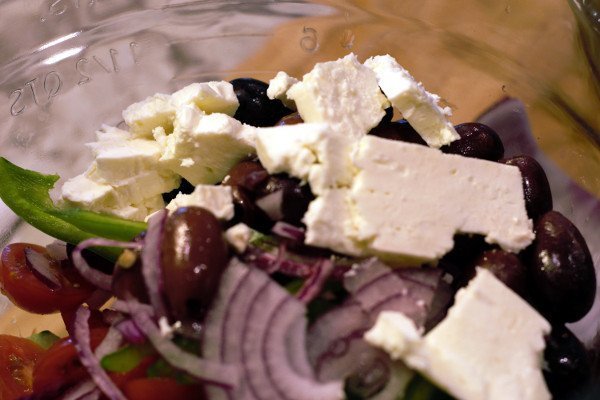 There cherry on top of this amazing Traditional Greek Salad Recipe is really the salad dressing which can be used with these ingredients as well as other garden type salads or even as a marinade.

In a small bowl, measure out olive oil, vinegar, lemon juice, and spices. Add them to the bowl in turn and mix thoroughly.Pour Salad Dressing over the large bowl of Greek salad and mix together gently. 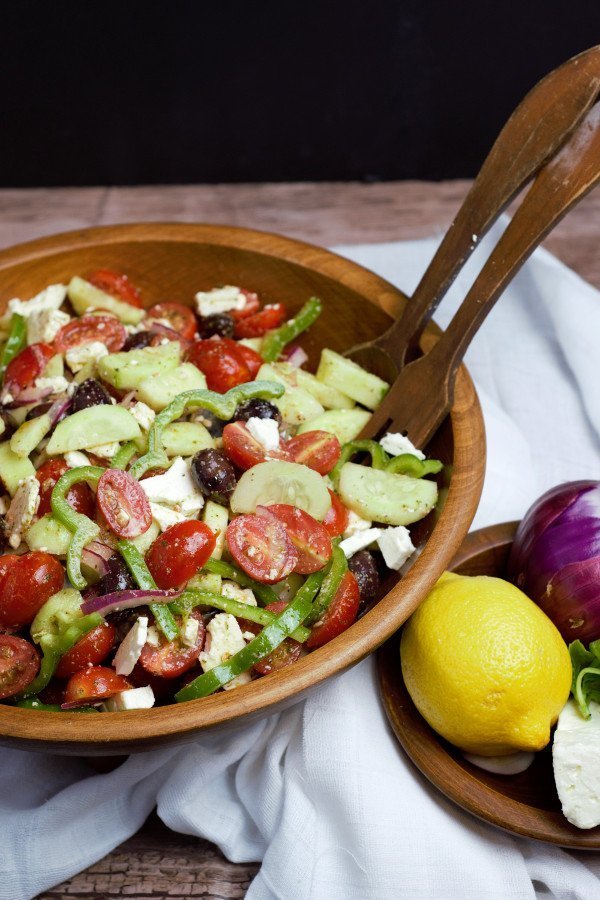 “What you leave behind is not what is engraved in stone monuments, but what is woven into the lives of others.”–Pericles.

Course: Salad
Cuisine: Greek/ Mediteranean
Keyword: greek salad, greek salad without lettuce, traditional greek salad'
Prep Time: 20 minutes
Cook Time: 0 minutes
Servings: 6 People
Calories: 131kcal
This Traditional Greek Salad recipe is so bright and delicious. Every bite conjures up feelings of sunshine and summer. The best part about this recipe is that it is so easy to put together. 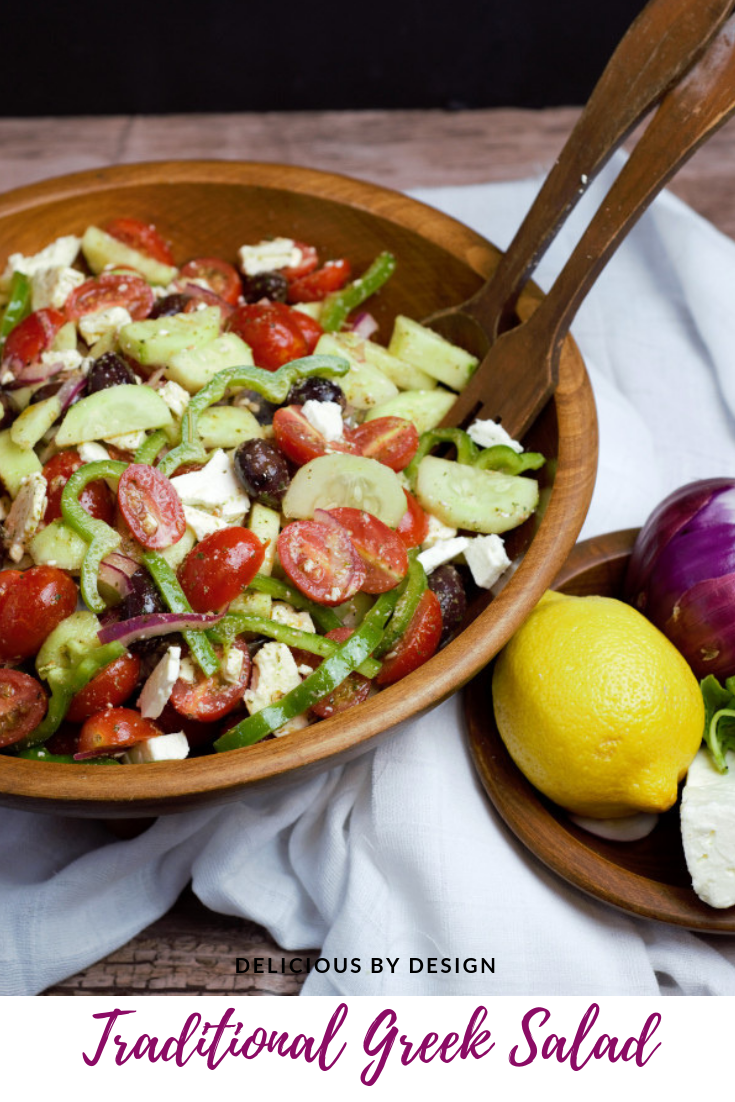 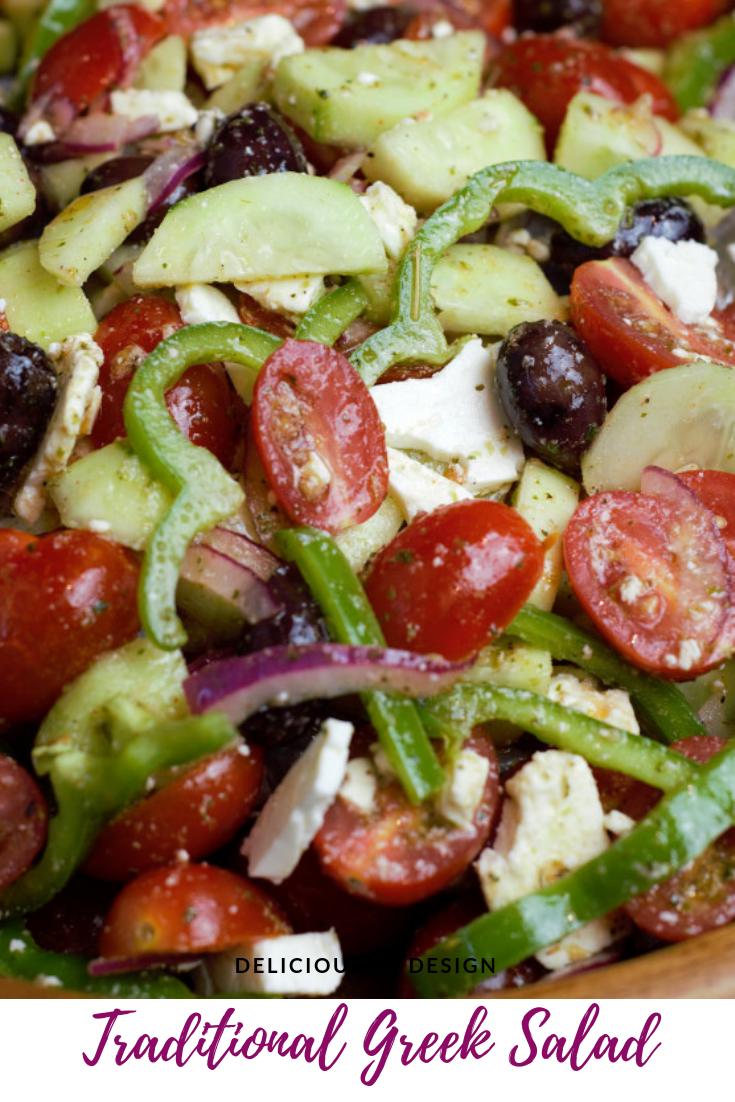 This amazing Waldorf Chicken Salad Recipe is the Leftover Makeover you’ve been waiting for. Take any leftover chicken and remake it into a delicious, hearty salad filled with grapes, apples, celery, and red onion. This is perfect for stuffing a rich croissant or having a lighter lunch with romaine lettuce hearts. How to Use Leftover…

END_OF_DOCUMENT_TOKEN_TO_BE_REPLACED

Avgolemono or Greek Lemon Chicken Soup is a very special recipe. Taking your first bite of this unique soup brings all of the warmth and comfort of traditional chicken soup, while the bright lemon flavor steals you away and drenches you with Mediterranean sunlight. Preparing This Beautiful Chicken and Rice Soup is So Easy, but…

END_OF_DOCUMENT_TOKEN_TO_BE_REPLACED

There is nothing worse than dry, flavorless chicken and this Lemon and Sage Braised Chicken is anything but that. Perfectly browned and moist, this chicken dish is bursting with bright lemon, earthy sage, and rich butter flavor. How to Handle Thighs: Chicken Thighs Chicken thigh meat on the bone is really flavorful and very…

END_OF_DOCUMENT_TOKEN_TO_BE_REPLACED

More Posts from this Category